This pattern may be found in the February 1989 Anna Magazine, and has been reprinted in the 2011 BuchVerlag fur die Frau folio entitled Schone Spitzen, ISBN 978-3-89798-335-9.  In the Anna Magazine it was called "Krokus" and in the reprint it is called "Feuerbohne." 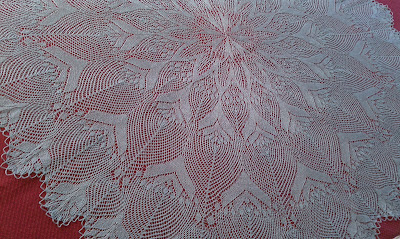 For this table centre, I used a very fine cashmere/silk from Yubina.  The thread is lovely, but very light.  I would not use it again for a tablecloth, because it is so soft, and the points do not stay sharp after blocking.  In fact, the entire cloth will need to reblocked and starched before I submit it to the California State Fair.  I do like this thread, but it is more suitable for a diaphanous scarf or shawlette. 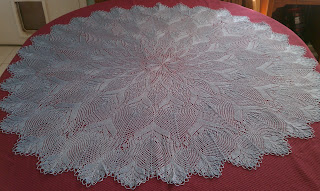 In the reprint, the repeating stitches are more difficult to follow, because every stitch is shown in the chart, whereas in Anna the first grouping is shown, followed by the number of times to repeat.  E.g.:

If a smaller size doily is desired, stop after Row 132 or after Row 80. 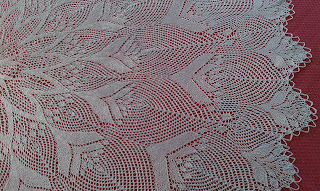 At Row 211, the 16 repeats are divided into 32 repeats.  Add additional repeat markers at this point.

Neither in the Anna magazine nor in the reprint is there a definitive process for crocheting off.  For this doily, I used the following stitch groupings. 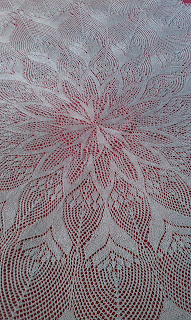 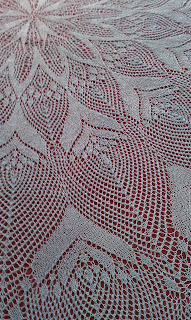 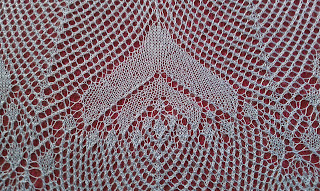 Posted by OceanKnitter at 12:03 PM

OceanKnitter
Knitting by the sea, with occasional distractions by my husband Paul and my pups Ellie and Gretel